The current Sequim Branch was built in 1983 to serve a population of approximately 14,000. Now serving a population of around 30,000, the Sequim library is still only 6000 square feet small.

Since 2014 a larger, modern library for Sequim has been a top priority for NOLS. Significant time and funds have been expended toward project planning, community engagement, and ballot measure development. Sadly, in November 2018, a bond measure that would have supported construction of a new and larger Sequim Branch narrowly failed to meet the 60% majority required for passage.

The cramped and outdated Sequim Branch remains a pressing concern for NOLS, but after careful consideration of many factors, the Board ultimately decided to step back from active work on the Sequim Future Library project until at least 2021. Read more about this difficult decision…

In meantime, NOLS will be exploring non-permanent modifications to branch infrastructure and site use that may alleviate some of the most pressing operational issues – until a more expansive and permanent resolution can again be considered.

At the February 28, 2019 meeting held at the Sequim Branch Library, NOLS’ Board of Trustees discussed how NOLS will move forward with the Sequim Future Library project. Their decision-making was informed by analysis and consideration of many factors, and with input from the community. Broadly speaking those factors related to:

The complete analysis is available here.

Following discussion, the Board passed a motion directing staff to:

The motion further noted that unexpected events could influence this decision, and that staff and Board should remain generally aware of changing circumstances, and open to re-initiating action at some earlier date if circumstances warrant.

Here is some background information about the Future Library planning project: 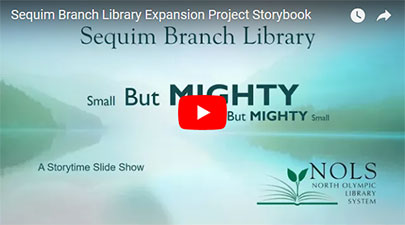 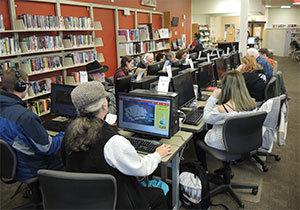 However you quantify it, the existing Sequim Branch building is simply too small – even for current use.

Opened to the public in 1983, the Sequim Branch Library consists of 6,000 sq ft of space. With a collection of over 55,000 items, it includes study and reading areas for adults, public computers, areas for children and teens, and a community meeting room.

The Sequim Branch is one of four NOLS libraries, serving a population of about 30,000 on the east end of Clallam County. Five times smaller than the Main Library in Port Angeles, usage statistics are surprisingly comparable. 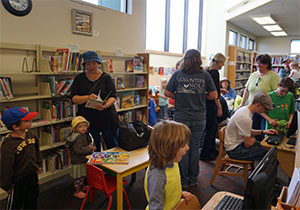 What Are All These People Doing in the Library

The Library supports imagination, connection, and understanding, through access to:

Over the years, a number of different library committees, advisory committees, and community groups have explored potential solutions to the problem of the undersized and outdated Sequim Branch. Unfortunately, for one reason or another, none of these endeavors ultimately evolved into a viable plan.

Mindful of these past disappointments, in 2014, NOLS initiated a deliberately paced, community-involved planning project. Phased planning allowed the Library to commit resources responsibly, solve problems incrementally, maximize community involvement, provide preliminary opportunities to test the waters of public opinion; and to proceed with planning while allowing the community to work on other capital funding issues of concern to the community. 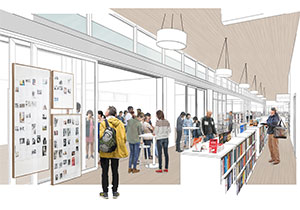 The Future of Libraries

Numerous studies, well supported in Clallam County by local usage data, confirm that public libraries continue to be a strong and vital component of their communities. Libraries have adapted well to a changing society, and continue to meet community needs in new and innovative ways. Books, in both print and electronic form, remain enduringly popular, access to technology and tech skills training is an important and expanding role of the modern library, as is the role of the Library as a community hub, where people can come together to meet, work, study, play, and create.

Despite the changing face of library service roles, library buildings remain essential to the library’s ability to meet community needs and expectations, and will continue to do so in the future.

Sequim Branch by the Numbers

here is where the video link will be.

here is the powerpoint vids for phased planning

The Future of Libraries

What are all these people doing in the library

what are these people doing in the library powerpoint info

A Day in the Life at the Sequim Branch Library

A Day in the Life of the Sequim Branch Library

A Day in the Life at the Sequim Branch Library